Forget Paris! When it comes to Europe’s most romantic city it is London all the way. Just look at these incredible shots from Nimia and Albert’s visit here in London. The newlyweds flew from Miami en route of their honeymoon! They booked me for a professional photo shoot in London, to celebrating their wedding by posing around famous streets and sights.

Our session started at the iconic Tower Bridge. Dating from 1894, it is a favourite spot with visitors to the city. The high walkways – 42 metres above the River Thames – give some of the best views in London, though the faint hearted may want to avoid looking down while crossing the 11 metre section of glass floor.

After Tower Bridge it was on to Westminster Palace and Big Ben, by which time Albert and Nimia were really getting into the London swing of things. When planning their session I asked the couple if there was anywhere specific they wanted their images taken. Their answer was pretty much everywhere, so that was where we went!

Albert and Nimia’s energy and excitement was infectious and we had a fun time taking shots against a backdrop of the London Eye, The Mall and Buckingham Palace, and Piccadilly Circus. The Mall is closed to traffic on Sunday making it the ideal day to get fantastic shots without having to dodge black cabs and red buses.

Nimia was clever with her outfits by choosing a palette of black and white, which helps give the gallery a cohesive look. Even in the more formal photos, such as the one of the couple on The Mall with Buckingham Palace in the background, look easy and relaxed – this is a couple who was visibly delighted to be in each other’s company. I barely had to give them any direction – they knew exactly what they were doing and the clearly had a great time doing it!

One of my favourite images is a romantic evening shot of Albert and Nimia leaning on a wall by Westminster Bridge. The summer sun had just set and Big Ben and Westminster Palace were beautifully lit against the darkening sky. There really is no city like London! 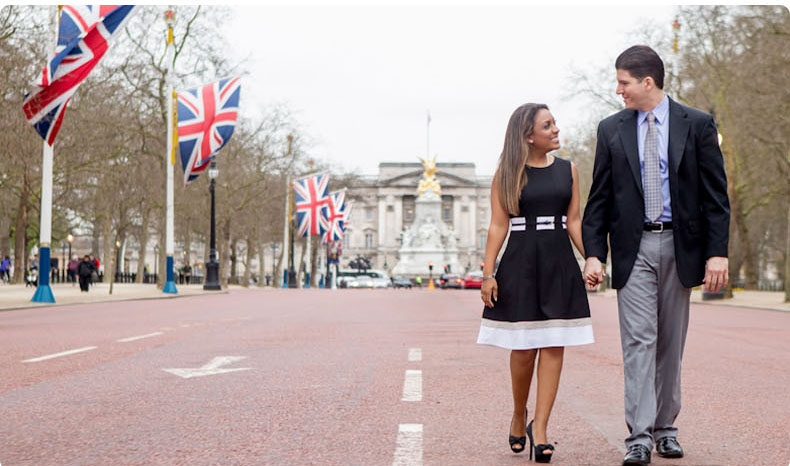